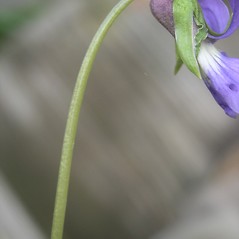 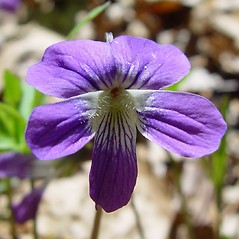 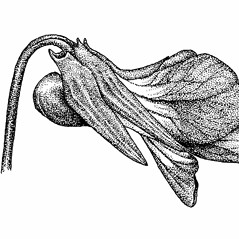 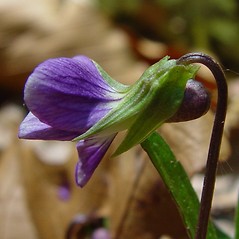 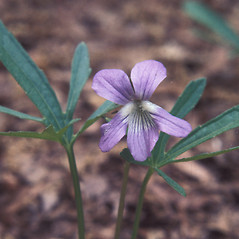 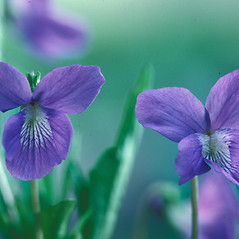 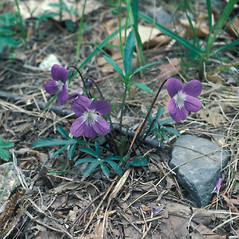 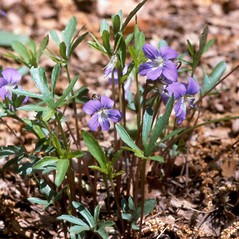 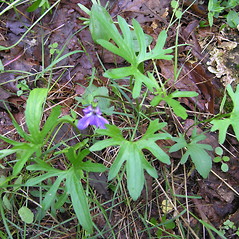 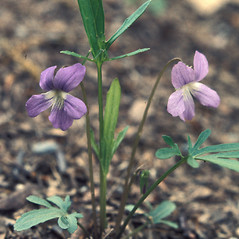 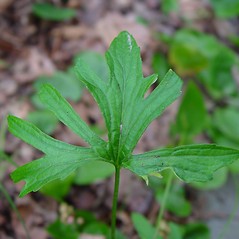 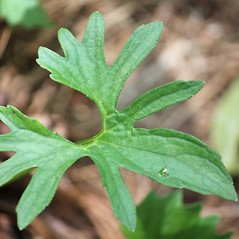 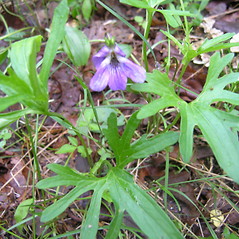 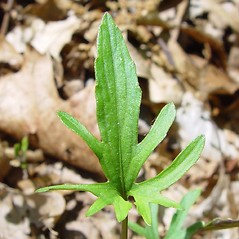 Viola brittoniana is a rare, acaulescent blue-flowered violet that occurs on the greater coastal plain in New England. It has distinctive leaves with narrow lobes and deep sinuses.

Leaf blade edges
the edge of the leaf blade has lobes, or it has both teeth and lobes

5×7. Viola brittoniana × Viola cucullata → Viola ×‌notabilis Bickn. is a very rare violet hybrid known from CT, MA, ME (the ME population is an escape from cultivation, the others are naturally occurring hybrids in wild populations). This hybrid is recognized by its ± glabrous herbage, robust size (characteristic of many V. cucullata hybrids), its variably lobed leaves with lobes broader and shorter than in V. brittoniana, and its longer, more cylindrical hairs on the lateral petals (not conspicuously knob-shaped as in V. cucullata).

5×11. Viola brittoniana × Viola lanceolata → This very rare violet hybrid is known from MA. It is relatively easy to distinguish due to the very different morphologies of the parental species. It is a relatively glabrous plant with cyanic corollas, short stolons later in the season, broad-lanceolate to narrow-ovate leaf blades that are lobed with an elongate central lobe and short lateral lobes (rather than triangular-ovate to suborbicular and with elongate lobes nearly as long as the entire blade in V. brittoniana).

5×18. Viola brittoniana × Viola pectinata → This very rare violet hybrid is known from CT, MA. It has lobed leaf blades somewhat similar to Viola brittoniana except that the lobes are broader relative to length and the sinuses are not as deep. Further, the early leaves are usually less  lobed relative to the later leaves. Given the floral and fruiting similarity of V. brittoniana and V. pectinata, the flowers appear as in both taxa (i.e., there is no altering of the reproductive morphology as there would be in other hybrids; e.g., shorter and broader tipped petal hairs in hybrids with V. cucullata, relatively broader sepals with some cilia  in hybrids with V. sororia).

5×25a. Viola ×‌mulfordae Pollard is a very rare violet hybrid known from CT, MA. It resembles V. brittoniana in its conspicuous lobed leaf blades, but the lobes are shorter and broader than in V. brittoniana and often with an elongate central lobe (contributing to the longer-than-wide aspect of the leaf blade). Further, the petioles and leaf blades are pubescent (glabrous in V. brittoniana).

5×27. Viola brittoniana × Viola sororia → Viola ×‌insolita House is a very rare violet hybrid known from CT, ME. It has variably lobed leaves (with broader and shorter segments than in V. brittoniana) with a prominent central lobe that are at least sparsely pubescent, sepals with cilia (at least on the auricles), prostrate to ascending cleistogamous peduncles, green or purple-spotted capsules, and brown seeds (pale brown to orange-yellow in V. brittoniana, light yellow-brown to brown or dark brown in V. sororia).