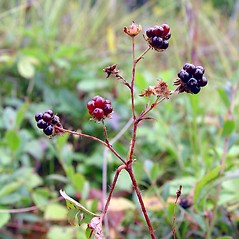 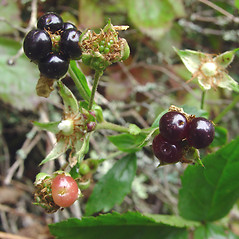 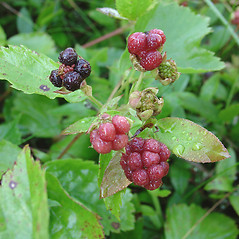 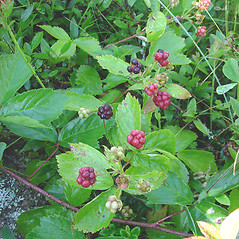 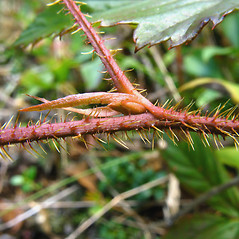 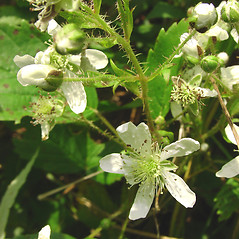 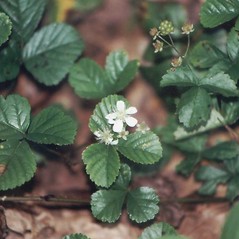 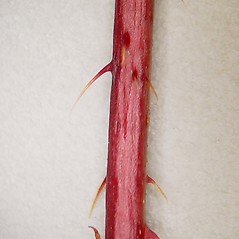 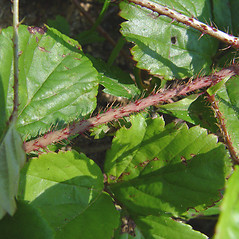 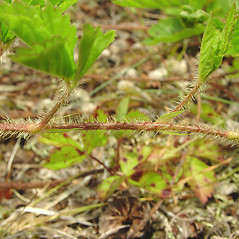 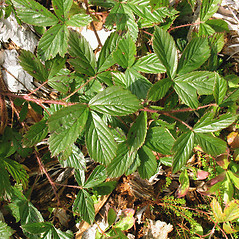 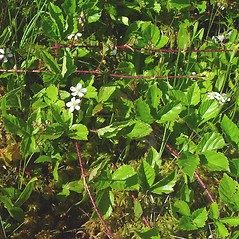 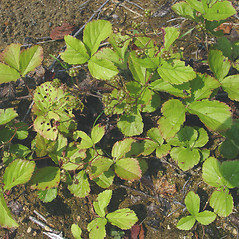 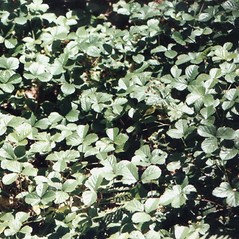 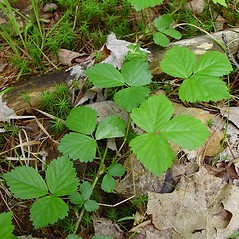 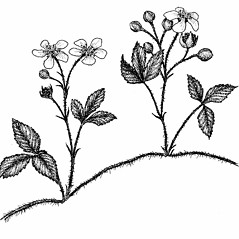 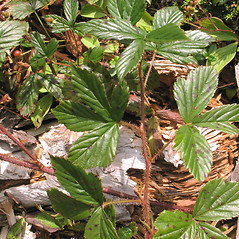 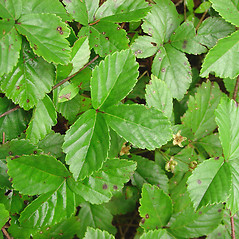 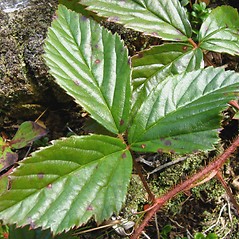 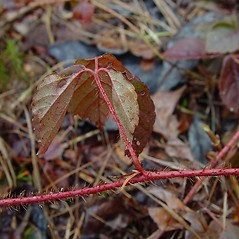 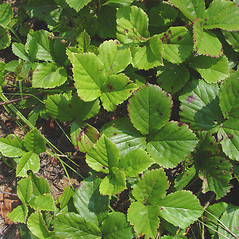 Bristly blackberry is a common trailing species partial to wet habitats. Its arching stems bear three-parted compound leaves and are armed with numerous bristles that are narrow at the base. The stems can root at the tips, producing new stems. The fruits of bristly blackberry are eaten by many species of birds.

Rubus vermontanus:
stems upright to arching and sometimes trailing near tip, the first-year vegetative stems with leaves that have usually 5 deciduous leaflets that are acute to acuminate at the apex (vs. R. hispidus, with stems extensively trailing, the first-year vegetative stems with leaves usually with 3 somewhat evergreen leaflets that are obtuse to acute at the apex).

12×14. Rubus flagellaris × Rubus hispidus → This rare blackberry hybrid is known from ME. It has primocane leaves with thick leaflets, the leaflets usually numbering 3 but often the lateral leaflets with a lobe on the outer, basal margin (these lobes variably developed, sometimes the leaf with 5 total leaflets). The primocane stems are armed with both prickles and bristles. Tentative synonym: Rubus mainensis Bailey.

13×14. Rubus frondosus × Rubus hispidus → This very rare blackberry hybrid is known from MA. It has primocanes with a mixture of small-based and broad-based prickles that are collectively abundant and abaxially pubescent leaves. The inflorescences have few, relatively small flowers.

14×17. Rubus hispidus × Rubus jaysmithii → This very rare blackberry hybrid is known from RI. It is intermediate between its parental species.

14×25. Rubus hispidus × Rubus recurvicaulis → This rare blackberry hybrid is known from MA, NH. It is marked by primocanes with trailing habit, primocane leaves with 3 or 5 leaflets that are chartaceous and not lustrous, stems armed with short prickles, bristles, and stipitate-glands, and short, compact, 6- to 10-flowered inflorescences up to 4 cm long.

14×26. Rubus hispidus × Rubus semisetosus → This very rare blackberry hybrid is known from MA. The primocanes are armed with mostly 100–300 bristles and small-based prickles per 10 cm and bear leaves with 3–5 oblong-ovate to ovate leaflets that are not lustrous (as in Rubus hispidus) and are abaxially pubescent on the midrib and primary lateral veins and sparsely so between them. It is very similar to R. hispidus ×R. vermontanus but has a greater degree of pubescence on the leaf blades.

14×28. Rubus hispidus × Rubus vermontanus → This uncommon blackberry hybrid is known from MA, ME, NH, VT. It closely resembles Rubus hispidus ×R. setosus but has some prickles that are slightly more stout and curved (in addition to the numerous bristles and stipitate-glands). Tentative synonym: Rubus viridifrons Bailey.