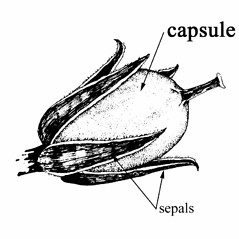 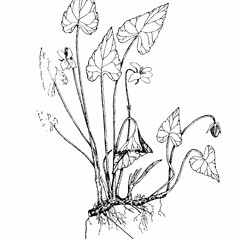 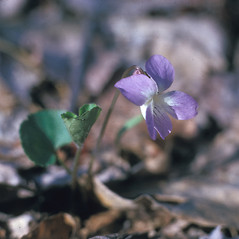 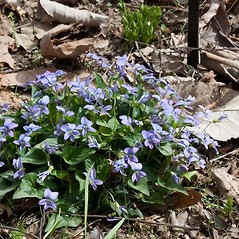 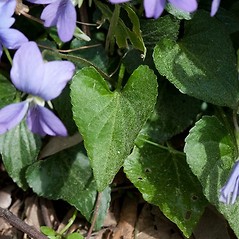 Viola affinis is a native, acaulescent, blue-flowered violet primarily found in wetlands. It reaches New England in the southern and western portions of the region. It is frequently confused with relatively hairless versions of Viola sororia.

2×7. Viola affinis × Viola cucullata → Viola ×‌consocia House is a rare violet hybrid known from CT, VT. It has relatively glabrous herbage and differs from V. cucullata with more cylindrical or weakly clavate hairs of the lateral petals, the sparsely pubescent spurred petal, and capsules spotted with purple. It differs from V. affinis in the more ascending cleistogamous peduncles, the corolla with a dark purple ring around the basal white area (similar to V. cucullata), and the elongate sepal auricles on cleistogamous fruits.

2×25a. Viola ×‌hollickii House is a very rare violet hybrid known from CT. It has relatively glabrous herbage, narrow-triangular leaf blades with coarse teeth at the base (intermediate between the parental taxa), and relatively upright cleistogamous peduncles (prostrate in V. affinis, ascending in V. sagittata var. ovata). The capsules are sometimes pubescent (as in V. affinis).

2×27. Viola affinis × Viola sororia → Viola ×‌filicetorum Greene is a very rare violet hybrid known from VT. It has leaf blades with less pubescence than V. sororia, sepals usually with some cilia (but sparser than V. sororia), and capsules with a mixture of seed colors, including light yellow-brown (as in V. affinis) to dark brown (as sometimes in V. sororia).