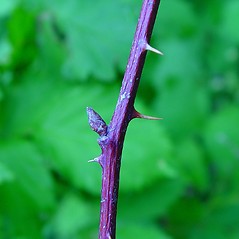 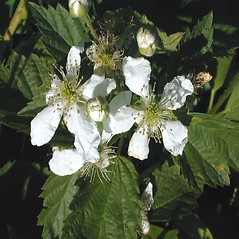 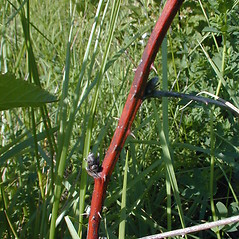 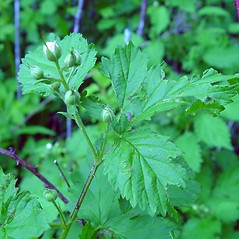 12×13. Rubus flagellaris × Rubus frondosus → This uncommon blackberry hybrid is known from CT, MA, NH. It is marked by primocanes with arching to doming or trailing habit, primocane leaflets pubescent abaxially, armature of hooked prickles, and 2- to 6-flowered inflorescences with a pubescent rachis (but lacking stipitate-glands).

13×14. Rubus frondosus × Rubus hispidus → This very rare blackberry hybrid is known from MA. It has primocanes with a mixture of small-based and broad-based prickles that are collectively abundant and abaxially pubescent leaves. The inflorescences have few, relatively small flowers.

13×17. Rubus frondosus × Rubus jaysmithii → This very rare blackberry hybrid is known from MA. It is marked by primocanes with arching to trailing habit and relatively stout prickles. The primocane leaves are abaxially moderately pubescent across the surface. The inflorescences are variable and have 1–6 flowers. This hybrid is very similar to Rubus flagellaris ×R. frondosus but has a greater degree of pubescence on the leaf blades.

13×25. Rubus frondosus × Rubus recurvicaulis → This rare blackberry hybrid is known from Ma, Me. It is very similar to Rubus flagellaris ×R. frondosus hybrids, but occurs with R. recurvicaulis as the low-growing parent rather than R. flagellaris.

13×26. Rubus frondosus × Rubus semisetosus → This very rare blackberry hybrid is known from MA. It is marked by arching habit, stems 3–5 mm in diameter armed with thin, numerous prickles 2–5 mm long that number up to 30 per 10 cm (the prickles are usually more slender than in typical Rubus frondosus). The leaves that are pubescent abaxially. The inflorescence resembles most closely R. semisetosus and has a pubescent, eglandular axis.