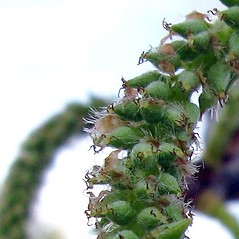 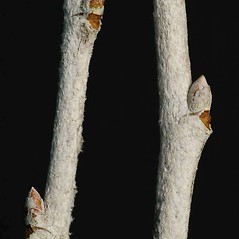 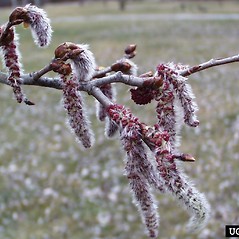 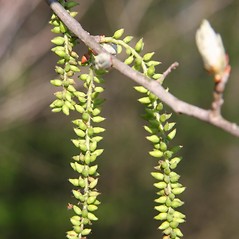 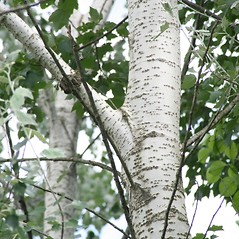 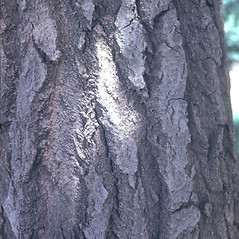 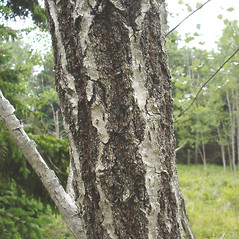 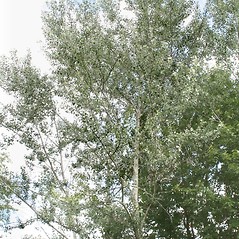 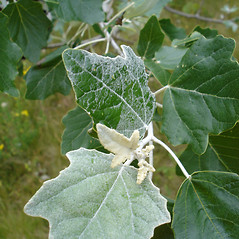 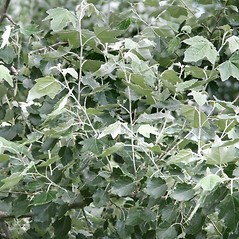 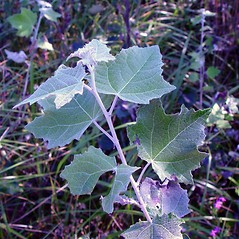 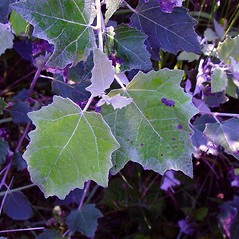 White poplar is distinguished from other poplars by its three-lobed leaves that are bright silver-white on their undersides. It grows rapidly in a variety of challenging conditions, and has naturalized in many habitats to become one of the most widespread trees in North America. Because it suckers readily, white poplar has been planted as a windbreak. It is also tolerant of urban pollution, making it a useful city tree, but its shallow roots can buckle sidewalks. Since it spreads easily from cultivation, it is considered an invasive species in many states, including Connecticut.

1×4. Populus alba × Populus grandidentata → Populus ×‌rouleauiana Boivin is a rare poplar hybrid in New England known from CT, MA. It has leaves borne on variable petioles, with most only somewhat compressed. The leaf blades, especially those toward the apex of the shoot, are abaxially moderately to densely tomentose, the tomentum sometimes in patches leaving much of the proximal leaf blade glabrous (rarely with some leaves with the entire abaxial surface glabrous). The  leaf blade margins most resemble P. grandidentata, though the teeth tend tend to be fewer and some blades show obscure lobes (the hybrid has 4–12 teeth per margin and   P. grandidentata has 5–14 teeth per margin).

1×7. Populus alba × Populus tremula → Populus ×‌canescens (Ait.) J.E. Smith is an uncommon hybrid poplar that has escaped from cultivation in CT, MA, ME, NH, RI, VT. It resembles P. alba in some aspects but has leaf blades that are merely dentate (i.e., the blades are not lobed or only scarcely so), the proximal ones sparsely to moderately tomentose abaxially with gray, brown-white, or sordid-white hairs (rather than bright white), and petioles that vary from compressed to subterete. The floral scales are prominently lacerate with 7–9 lobes, and the staminate flowers have 8–15 stamens (rather than floral scales merely dentate with many apical teeth and staminate flowers with 5–10 stamens in P. alba).

1×8. Populus alba × Populus tremuloides → Populus ×‌heimburgeri Boivin is a rare poplar hybrid that is known from MA. It has first leaves that are tomentose on the abaxial surface of the blades with white-gray hairs and blade margins with (4–) 6–8 large, blunt teeth (only rare blades show any sign of the lobing of P. alba). The new leaves are similar in regard to pubescence but have mostly 11–17 small teeth (i.e., approaching the morphology of P. tremuloides). It is further characterized by petioles that vary from compressed to subterete.