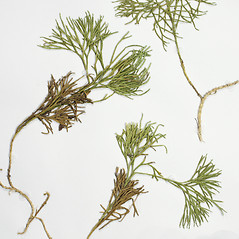 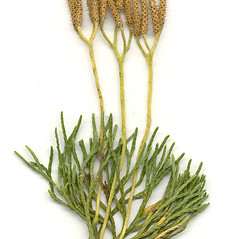 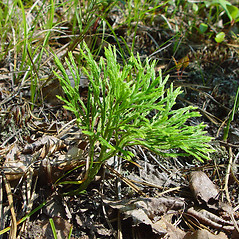 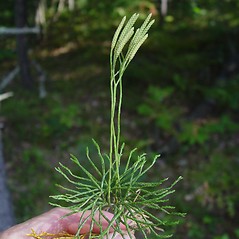 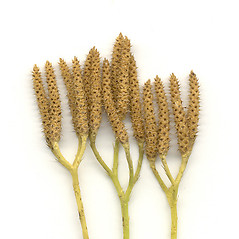 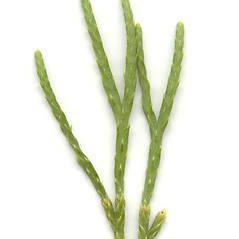 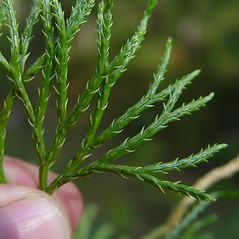 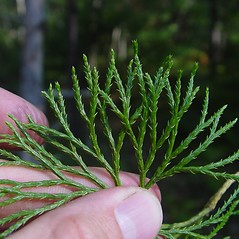 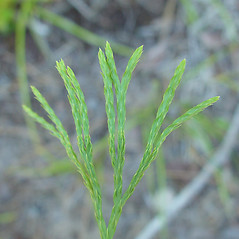 The branches of blue ground-cedar have a distinctive blue-green color due to the bloom on its surfaces. This species can hybridize with all the other ground-cedar (Diphasiastrum) species in New England.

Leaf shape
the vegetative leaves are short and scale-like

Form of shoot
the plant has an upright stem, with branches, those branches having further branches, and so on (tree-like)

Leaf outline
the vegetative leaves are roughly triangular, widest at the base where the leaf joins the stem

1×4. Diphasiastrum complanatum × Diphasiastrum tristachyum → Diphasiastrum ×‌zeilleri (Rouy) Holub is a rare ground-cedar hybrid known  from ME, NH, VT. It is intermediate between its parents in branch width, number of times  the branches divide, and relative size of the trophophylls of the lower rank.

1×Diphasiastrum alpinum (L.) Holub. Diphasiastrum ×‌issleri (Rouy) Holub is  a very rare ground-cedar hybrid in New England known only from northern ME. It  generally resembles D. complanatum except that its lateral trophophylls usually roll under the branch (i.e., the branch margin is revolute) and the base of its strobilus  is not distinct (i.e., there is a gradual transition from strobilus stalk trophophylls to strobilus sporophylls).

2×4. Diphasiastrum digitatum × Diphasiastrum tristachyum → Diphasiastrum ×‌habereri (House) Holub is an infrequent ground-cedar hybrid known from MA, ME, NH, VT. It has winter bud constrictions on the lateral branches, similar to D. tristachyum, but is otherwise intermediate in branch width, relative size of trophophylls of the lower rank, and strobilus stalk branching.