There are several things that are particularly important to look for when identifying species of Rosa. Look at shoots with normal growth when assessing prickle size and density. Plants sometimes produce vigorous shoots with greatly elongated growth, identifiable by the absence of both abrupt color changes of the bark and annual scars normally found at the junction of the year’s growth. These vigorous shoots are usually much more densely prickly than the normal shoots and are misleading for identification. To check stipule structure, use stipules on leaves located near the base or middle part of a branchlet and not the top one or two leaves. If you need to check for bracts beneath the flowers, use stems with budding flowers because the bracts are shed early. Species described in the key as having pinnatifid sepals actually produce flowers with 2 entire sepals, 2 sepals with slender lobes on both margins, and 1 sepal with slender lobes on only 1 margin. A clue that a rose may be a naturalized European species and not native is the presence of a double corolla. References: Lewis (1957), Graham and Primavesi (2005), Joly and Bruneau (2007). 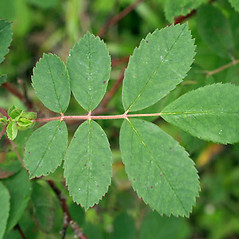 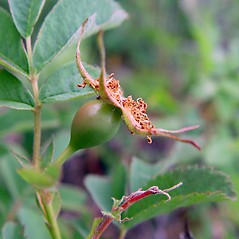