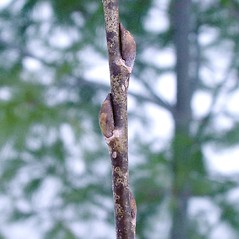 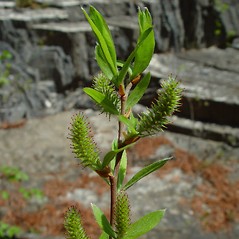 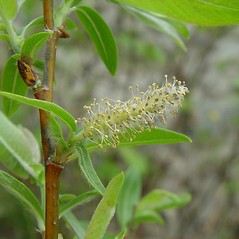 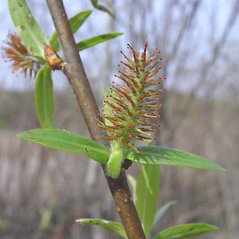 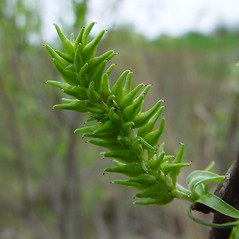 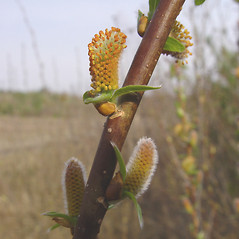 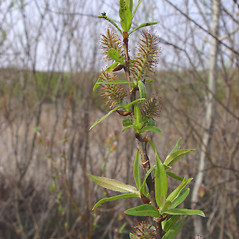 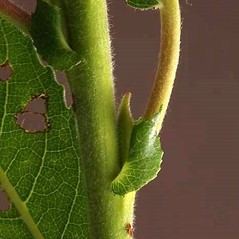 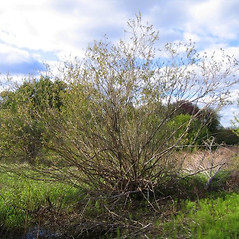 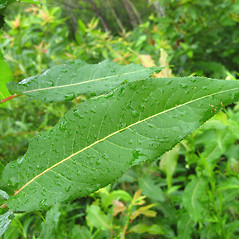 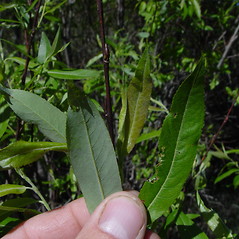 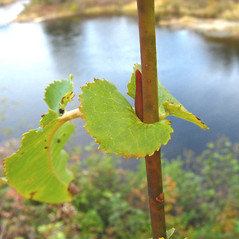 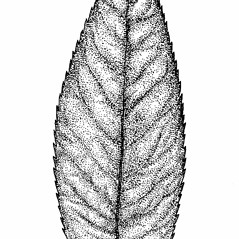 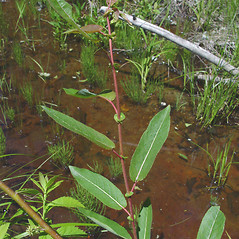 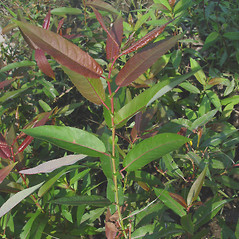 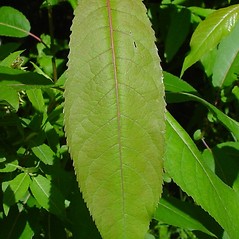 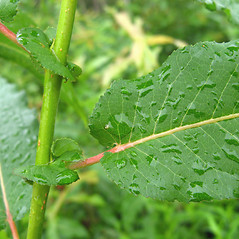 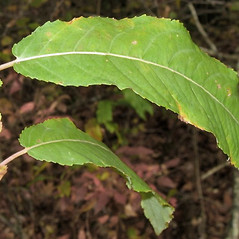 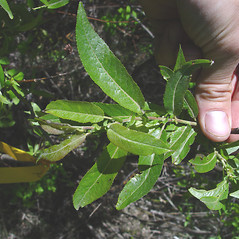 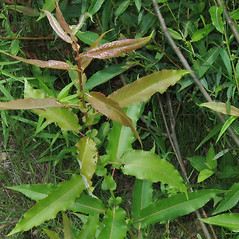 The thick leaves of heart-leaved willow are somewhat heart-shaped at the base and are hairy underneath. This multi-trunked small tree has dark, scaly bark. Silky catkins appear before the leaves in spring. This is a fast-growing small tree, but short-lived. Gall insects often infest the leaves. This species is a host for the caterpillars of the Mourning Cloak butterfly (Nymphalis antiopa), an early-spring flier. Many willows (Salix species) have bitter-tasting bark that contains derivatives of salicylic acid, the main compound in aspirin.

Bud scale number
there is one scale on the winter bud, and it covers the scale like a cap

7×12. Salix candida × Salix eriocephala → Salix ×‌rubella Bebb is a very rare willow hybrid in New England that is known from MA. It has narrow-elliptic leaf blades with small, sharp, forward-pointing teeth and weakly revolute margins, sparsely pubescent ovaries, and two-toned floral bracts (light brown at the base and darker brown near the apex).

10×12. Salix discolor × Salix eriocephala → This uncommon willow hybrid is known from MA, ME. It resembles S. discolor except that the leaf blades are ± elliptic (vs. elliptic to oblanceolate or obovate), and the marginal teeth are more numerous and relatively sharper. The ovaries show sparse pubescence during flower (vs. densely pubescent in S. discolor and glabrous in S. eriocephala).

12×23. Salix eriocephala × Salix petiolaris → This uncommon willow hybrid is known from MA, ME, and VT (and very likely found in other states as well). It is intermediate between the two species in terms of leaf blade outline and size and frequently shows small stipules at the nodes. The ovaries are usually sparsely pubescent but are sometimes nearly glabrous except for patches of hair near the base and apex.

12×27. Salix eriocephala × Salix sericea → Salix ×‌bebbii Gandog. is an uncommon hybrid known from CT, MA, ME, NH, VT. Though it is generally intermediate between the two parental species in various morphological characters (e.g., leaf blade outline, leaf blade pubescence, prominence of stipules, pubescence on branchlets), it is morphologically variable, and extremes approach either parent. One of the most diagnostic characters is the pubescence on the ovary, which is sparse in this hybrid (though often absent near the base; absent altogether in S. eriocephala and dense throughout during flower in S. sericea). Most reports of S. myricoides from New England other than Aroostook County, ME, are based on this hybrid (i.e., the name Salix myricoides was misapplied to this hybrid by many authors, including Fernald 1950b and Magee and Ahles 1999).