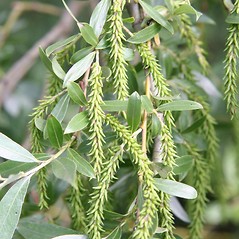 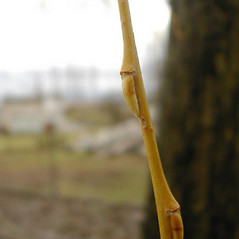 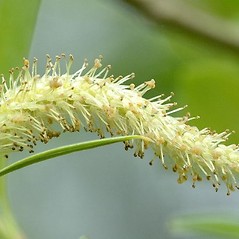 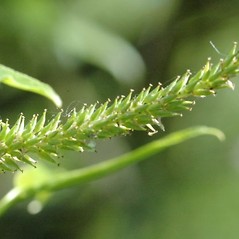 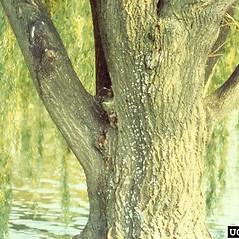 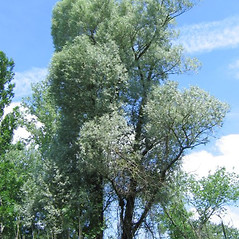 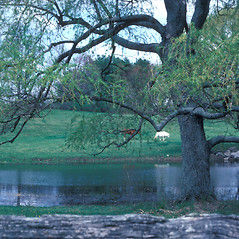 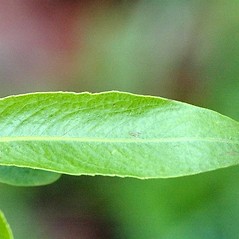 White willow is so-named for its long, tapering leaves which are downy white on the undersides. The branchlets are brittle and break easily, sometimes leaving a litter of fallen twigs on the ground beneath the crown. Weeping willow is a hybrid between this species and brittle willow (Salix euxina).

Bud scale number
there is one scale on the winter bud, and it covers the scale like a cap

Salix amygdaloides:
winter buds with a sharply pointed apex, the margins distinct and overlapping, leaf blades somewhat abruptly tapering to a long, thin apex, and branchlets flexible at base, tearing when bent to failure (vs. S. alba, with winter buds blunt at apex, the margins connate; leaf blades gradually tapering to the apex, and branchlets brittle at base, breaking +/- cleanly at the junction of yearly growth).
Salix nigra:
leaf blades green on the lower surface, with small, but evident, stipules at the base of the leaf stalk (vs. leaf blades with a whitish bloom on the lower surface, without or with minute stipules at the base of the leaf stalk).

white willow.  1a. Salix alba L. ssp. caerulea (Sm.) Rechinger f.; S. alba L. var. caerulea (Sm.) Sm.; S. alba L. var. calva G.F.W. Mey. • CT, MA, ME, NH, RI, VT. Riparian forests, river banks, roadsides, field edges, wetland margins, near dwellings. There are three forms of this willow that occur in New England. Plants referred to by the epithet “vitellina”, which have bright yellow to bright orange-yellow winter branchlets and floral bracts commonly 3–3.5 mm long, represents one expression of the hybrids between Salix alba and S. euxina (Belyaeva et al. 2018). Therefore, these willows are properly referred to as Salix ×fragilis (q.v.). The remaining three forms are part of Salix alba. The “alba” form has branchlets and floral bracts 2.5–3 mm long and leaf blades 5–10 (–12) cm long, 0.5–1.5 cm wide, these often remain long-sericeous on the abaxial surface. The “caerulea” form has winter branchlets and floral bracts similar to the preceding, but with mature leaf blades often longer than 10 cm and 1.5–2 cm wide, and these usually become glabrate on the abaxial surface. A third form, which may be referable to “micans” of Europe, is similar to the “alba” form but has the leaf blades densely and persistently long-sericeous with white hairs. These forms are regarded as valid infraspecific taxa in Europe (where they occur as natives; e.g., Meikle 1984) but are treated as cultivars by some North American authors (e.g., Argus 1986). Until the appropriate rank to treat these taxa can be determined, they are here recognized informally.

1×16. Salix alba × Salix lucida → Salix ×‌jesupii Fern. has been incorrectly called S. ×‌ehrhartiana by various New England authors (but that hybrid has S. alba and S. pentandra as parents and is not known to occur in New England). Salix ×‌jesupii is known from CT, MA, NH, VT. This hybrid is a tall shrub or small tree 4–8 m tall with abaxially glaucous leaf blades (rather than green and not glaucous in S. lucida) that show a mixture of white and red-brown hairs. The blades are mostly 2.8–4.8 times as long as wide (vs. mostly 4.2–7.3 times in S. alba). The staminate flowers have 3 or 4 stamens (rather than 2 in S. alba).

1×S. euxina I.V. Belyaeva. Salix alba × Salix euxina I.V. Belyaeva → Salix ×‌fragilis L. [Fig. 887] is a frequent willow hybrid known from CT, MA, ME, NH, RI, VT. It resembles S. alba but has sparsely pubescent to glabrous leaf blades, coarser, sometimes slightly irregular, teeth, and larger, asymmetrical stipules. From S. euxina it differs in its amphistomatous, usually abaxially sparsely pubescent leaves and relatively loosely flowered aments (leaves both glabrous and hypostomatous and aments relatively densely flowered in S. euxina). This hybrid, which is fully naturalized in riparian and lacustrine floodplains, is responsible for reports of Salix euxina in New England (note: S. euxina was formerly referred to as S. fragilis, and this hybrid was formerly referred to as S. ×‌rubens Schrank; Belyaeva 2009). The nothovarietal epithet “basfordiana” applies to our material; however, the appropriate combination has not yet been made. Forms of this plant with bright yellow to orange-yellow branchlets, called "vitelline" at various ranks, and usually allied to S. alba, have been shown to properly belong here as part of the morphological expression of S. ×‌fragilis (Belyaeva et al. 2018).