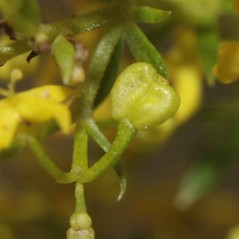 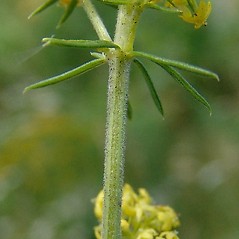 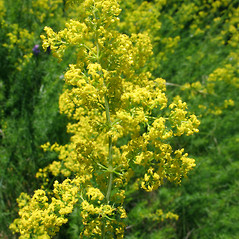 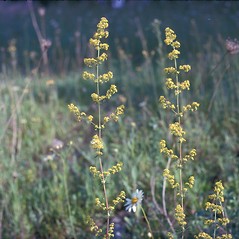 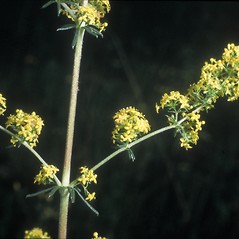 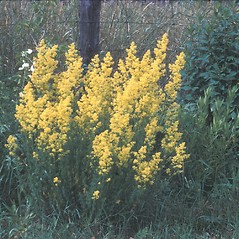 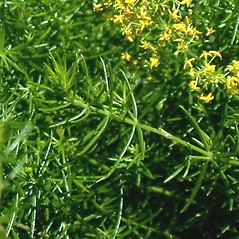 Yellow bedstraw was introduced to North America from Europe, where it has traditional uses such as to curdle milk for cheesemaking and to color the resulting cheese.

Leaf arrangement
whorled: there are three or more leaves per node along the stem

Number of sepals, petals or tepals
there are four petals, sepals, or tepals in the flower

1a.  Leaf blades 15–30 (–35) ×0.5–1 (–2) mm, with prominently revolute margins such that the margins are recurved to the abaxial midrib, shorter than to longer than the associated internodes; inflorescence with dense, contiguous flowers, the branches longer than the corresponding stem internodes; flowers fragrant … 22a. G. verum ssp. verum

12×22. Galium mollugo × Galium verum → This very rare bedstraw hybrid is known from MA. It most closely resembles Galium verum but can be recognized by its quandrangular stems (at least below;  rather than terete with 4 raised lines), linear to narrow-lanceolate leaf blades with  some usually wider than 1.5 mm that usually do not darken in drying (rather than  linear, usually narrower than 1.5 mm, and usually darkening in drying), and a bright  yellow to yellow-white corolla with somewhat apiculate lobes (rather than yellow and merely acute at the apex of the lobes). It is very similar to G. ×‌pomeranicum Retz.   ( G. album ×G. verum; a nothospecies not yet documented from New England) except that the corollas are usually narrower than 3 mm (rather than usually wider than  3 mm). This hybrid is responsible for reports of G. ×‌pomeranicum in New England  (e.g., Seymour 1982, Sorrie and Somers 1999). It may also be responsible for reports  of that nothospecies from CT, but specimens were not available for study.