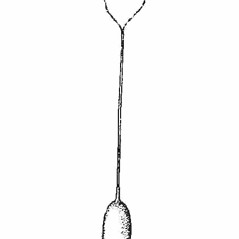 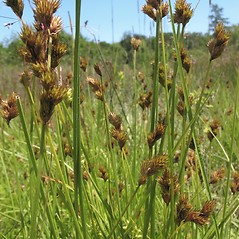 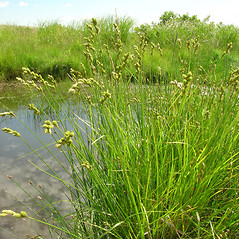 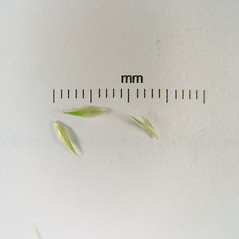 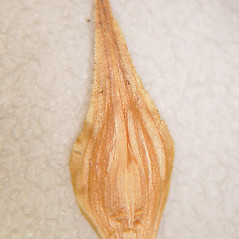 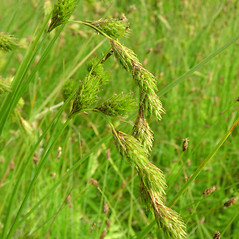 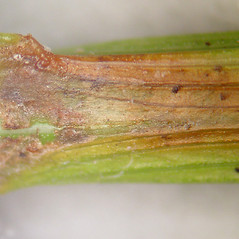 The inflorescences of this species can be quite variable: crowded or spread out, stiff or arching. There are two distinct varieties in New England, one (Carex scoparia var. scoparia) being common throughout New England, while the other (C. scoparia var. tessellata) is found only in eastern Maine.

Leaf sheath color
the leaf sheath has no pink, red or purple tinting

1a.  Carpellate scales and apex of perigynium stramineous to gold-brown, of relatively similar color as body of perigynium and not contrasting with it; perigynia 4.2–6.8 mm long, (2.5–) 2.8–4 times as long as wide; inflorescence with spikes aggregated to separate   … 56a. C. scoparia var. scoparia

Variety scoparia is known from CT, MA, ME, NH, RI, VT. Variety tessellata is known only from eastern ME (within New England). It has narrower leaves and thinner stems than sympatric plants of C. scoparia var. scoparia and should probably be treated as a distinct species.

56×61. Carex scoparia × Carex tincta → This very rare hybrid known from NH. It can be separated from C. scoparia by its apical, herbaceous portion of the leaf sheaths, which vary from obscurely to evidently minutely papillose, and the carpellate scales that have some red-brown coloration. From C.tincta it differs in its acuminate carpellate scales that are sometimes prolonged into a short awn and perigynia that are merely lanceolate (as opposed to wider).