Species of Erodium have many similarities to Geranium species. It is much easier to identify species when plants are in fruit. The fruit has five carpels, each of which has two parts: a swollen lower part containing the seed called the mericarp body, and a slender, elongate upper part called the carpel beak. The carpel beaks are attached to the styles until the fruit matures, and then each one splits independently completely away from the styles and forms a coil with the mericarp body at its base. Sepals continue to grow as the plants set seed, and sepal measurements in the key are for fruiting specimens. Some diagnostic features of the fruits can be assessed when the fruits are immature, but others cannot; their specialized structure does not develop until maturity. Reference: Taylor (1993). 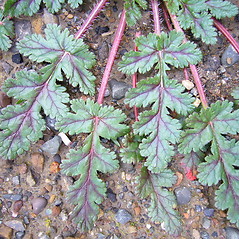 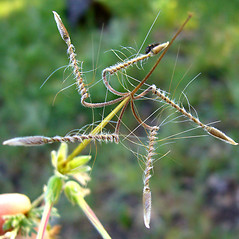