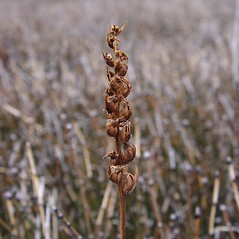 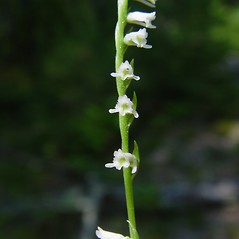 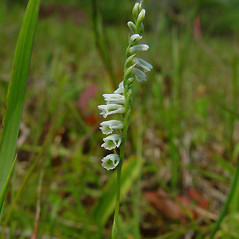 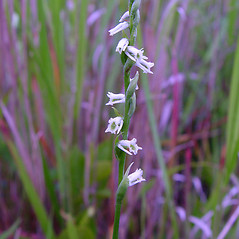 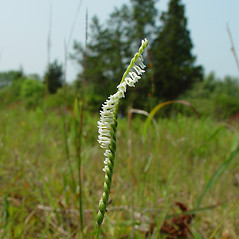 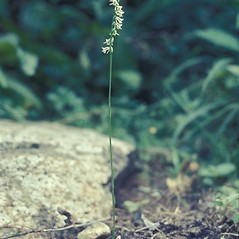 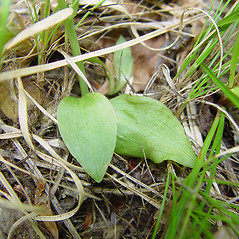 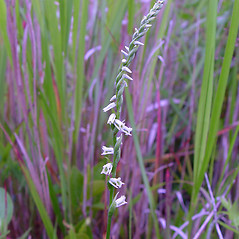 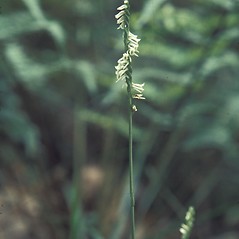 Slender ladies'-tresses is the easiest species of ladies'-tresses to identify, due to the distinctive green or yellowish-green spot on the center of the labellum (lower modified petal). It tolerates a range of dry to moist habitats including roadsides, and is pollinated by bumblebees. The Ojibwa used the roots of slender ladies'-tresses as an ingredient in a charm to bring luck to hunters. Note that there are two varieties in New England, as well as a couple of rare hybrids.

Number of leaves on stem
one

Lower petal outline
the labellum is simple in form

Nectar spur
there are no nectar spurs on the flower

Lower petal characteristics
the labellum is simple in form

1b.  Flowers relatively loosely arranged on the spike, secund to loosely spiraled, the ratio of spike length in mm to flower number equal to or greater than 2.3; basal leaves usually persisting through anthesis; rachis of inflorescence sparsely pubescent   … 3b. S. lacera var. lacera

3a×7.  Spiranthes ×‌eamesii P.M. Brown is a rare ladies’-tresses hybrid in New England that is known from CT (it has also been reported from other southern New England states, but specimens are unknown), where it usually grows with both parents. It has a white labellum with green-yellow tinting on the labellum (those of S. tuberosa are pure white), usually 2 white, narrow-conical roots, and lacks leaves during anthesis (similar  to both parents). The flowers are intermediate in size between the parents (4–7.5 mm long is S. lacera var. gracilis and 3–5.5 mm long in S. tuberosa).

3a×8.  Spiranthes ×‌intermedia Ames is a very rare ladies’-tresses hybrid in New England that is known from southeastern MA. It is similar to Spiranthes vernalis except that the pubescence of the inflorescence is slightly expanded apically into a slender gland (vs. pointed at apex) and the lateral petals show two primary veins, one of which usually branching to create three veins distally (vs. usually three mains originating from the base of each lateral petal). Spiranthes lacera var. gracilis shows stipitate-glands in the inflorescence and usually two unbranched veins on the lateral petals. Spiranthes ×‌intermedia is further characterized by yellow-green coloration along the center of the labellum that may become more yellow near the apex and a stipitate column (similar  to S. vernalis).